by Oliver Gill
With the ever-growing saturation of media becoming more muddled, videogames have
become an important breath of fresh air for people seeking interesting content. One is
particular-Hollow Knight-is an exemplary example of how a small team can make a stunning
Indie game with the quality of a “AAA” one. The Metroidvania action-adventure game was
developed and published by Team Cherry in 2017. Combined with its exquisite hand-drawn
character design and scenery, Hollow Knight’s haunting soundtrack and challenging gameplay
make its playing experience all the more memorable. Hollow Knight stands out against similar
games in the field through Team Cherry’s vision, the game’s well-balanced difficulty scale, and
its extensive circulation in the gaming community.

One of the most impressive aspects of Hollow Knight is the clear and tenacious vision of
the small team behind its creation. Ari Gibson and William Pellen were responsible for its game
design while David Kazi was in charge of the game’s technical direction. More specifically,
Gibson created the game’s art, environments, and bug animations while Pellen created the
enemy, boss, and game behavior for Hollow Knight. The main character of Hollow Knight -- a
silent, pale-faced, genderless bug later labeled the Knight--was designed by Gibson and Pellen as
part of their submission for the 27th iteration of the game jam Ludum Dare. Following the event,
they explored possible game concepts revolving around their new insectoid protagonist and
pursued the style of a Metroidvania platformer. Development began, starting with movement
mechanics inspired by the Megaman and Megaman X series to allow for pristine control of the
character at all times. In an interview with Game Informer, Pellen explains the intention was to
make players feel that, “any hit they take or mistake they make could have been avoided right up
until the last second” (David Milner, “The Making of Hollow Knight”, Game Informer, 2018).
Gibson and Pellen’s passion and intention shine clearly through the entire developmental process
leading to Hollow Knight’s official release.

Hollow Knight’s intricate platforming, difficult boss battles, and variety of pesky enemies
all add to the challenge the game is known for. The Knight starts with five masks of life, each of
which can disappear if they are damaged in any way. Defeating enemies allows the Knight the
collect soul in a container depicted in the top left of the screen, which when focused can be used
to bring back the masks. If the Knight loses every mask, they are brought back to the last save point
with a now cracked soul container and lost geo -- Hallownest’s currency. The ghost of the Knight’s past
life now lives where they died, and the players must defeat the Shade in order to replenish their soul
and geo. Dying before reclaiming the Shade results in the player’s geo being lost forever. There is no
game over in Hollow Knight, it instead encourages the player to try again. Save points are marked by
benches sprinkled across the map the Knight can rest at, but the trek between them is riddled with
winding roads that are easy to get lost in. When one boss battle may seem too difficult, there is
always an unexplored area for players to turn to before diving into battle once more. There is a
common trap skill-based games can fall into in which the difficulty feels unforgiving, overly frustrating,
or a combination of the two. Hollow Knight strikes a balance in its challenge through solid movement
controls and readable level design that make mistakes players make feel well deserved.
The game is far from forgiving, but lays out the necessary tools to let players organically solve puzzles
or struggles they may come across.

Since Hollow Knight’s release, four free expansions have been added to further increase
the content of the world. Hidden Dreams, The Grimm Troupe, Lifeblood, and Godmaster all
added new quests, enemies, bosses, quests, upgrades, and music that gave people who played the
game upon release something to look forward to. Certain additives were meant for the late-game
while others could be stumbled upon at any point in a player’s adventure. Either way, the
upgrades were all implemented organically and with the greater lore of Hollow Knight in mind.
The most recent release of Hollow Knight for the Nintendo Switch includes the expansions and is
only $15 to purchase. I have immense respect for Team Cherry providing their audience with
new content without needing to put up a paywall, and it illustrates how Gibson and Pellen’s
initial vision is still thriving in the present day. In February 2019, Team Cherry announced a
sequel to Hollow Knight known as Silksong. Initially, fans only knew the game would star an ally
to the Knight, Hornet. Throughout June and early July of that year, Team Cherry released four
coded riddles to the Hollow Knight discord alongside locked ZIP files. Cracking the riddles
required extensive knowledge of Hollow Knight, and their solutions would reveal the name of a
Silksong character, which was also the password to each respective ZIP file. Inside each file was
a description, image, and GIF of the character in action. Though Silksong has yet to release, the
unique updates for highly anticipatory fans show Team Cherry’s understanding of what satiates
their audience.

Hollow Knight’s relevance has sustained through Team Cherry’s continued vision, the
game’s balanced difficulty, and its thriving community of people continuing to experience what
the game has to offer. The mixture of stunning artistry and hard-earned victories make Hollow
Knight’s gameplay one of a kind. In my first playthrough of Hollow Knight, I put roughly 75
hours into the game after beating the “final” boss. Even then, I knew I had not explored the
entirety of the game and have since gone back to attempt several boss battles I previously
avoided. I am no expert platformer by any means, but the structure of Hollow Knight’s gameplay
kept bringing me back to try my hand at a seemingly impossible section or fight. Hollow Knight
has paved the way for a new era of games combining vast worlds with meaningful challenges
that allow for more progression with each attempt a player makes. 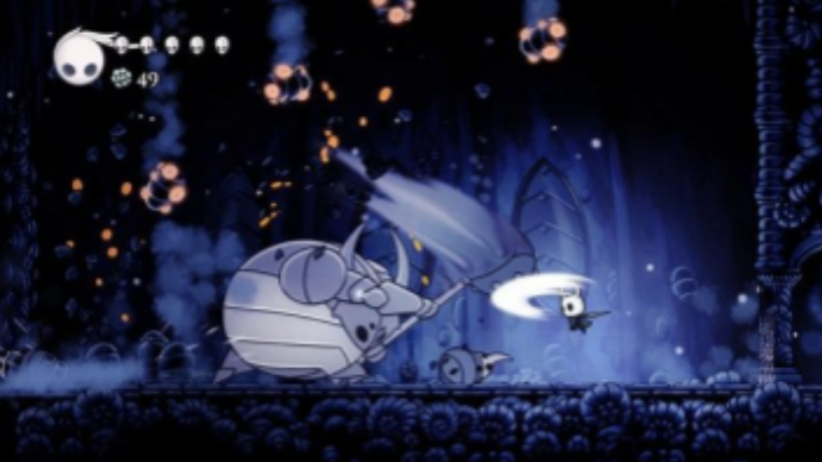