In “Who Are the Folk?” by Alan Dundes, folk is defined as, “any group of people whatsoever who share at least one common factor” (Dundes, 6). When applying this to the term folklore, folklore could be defined as the stories, ideas or practices resulting from a group of people sharing at least one thing in common with one another. This definition offered by Dundes’ can be used to explore who folk are and what folklore is when looking at popular culture. In this essay, I will examine a set of memes, a form of popular culture, that was created for a specific community and explain its significance in relation to Folklore.
​
Before examining current memes and discussing how they relate to Folklore, it is important to understand what a meme is and how it came to be. In Linda K. Börzsei’s essay titled, “Makes a Meme Instead: A Concise History of Internet Memes” she uses a definition that defines a meme as, “a piece of culture, typically a joke, which gains influence through online transmission” (Börzsei, 4). One of the first memes, according to Börzsei, was an emoticon smiley face created in 1982 and the first internet meme was from the website Bert Is Evil in 1997. This demonstrates from the first usage of a meme to today’s current usage in social media platforms, the concept was the same, memes were created to convey some type of culture or to provide humor to its audience. 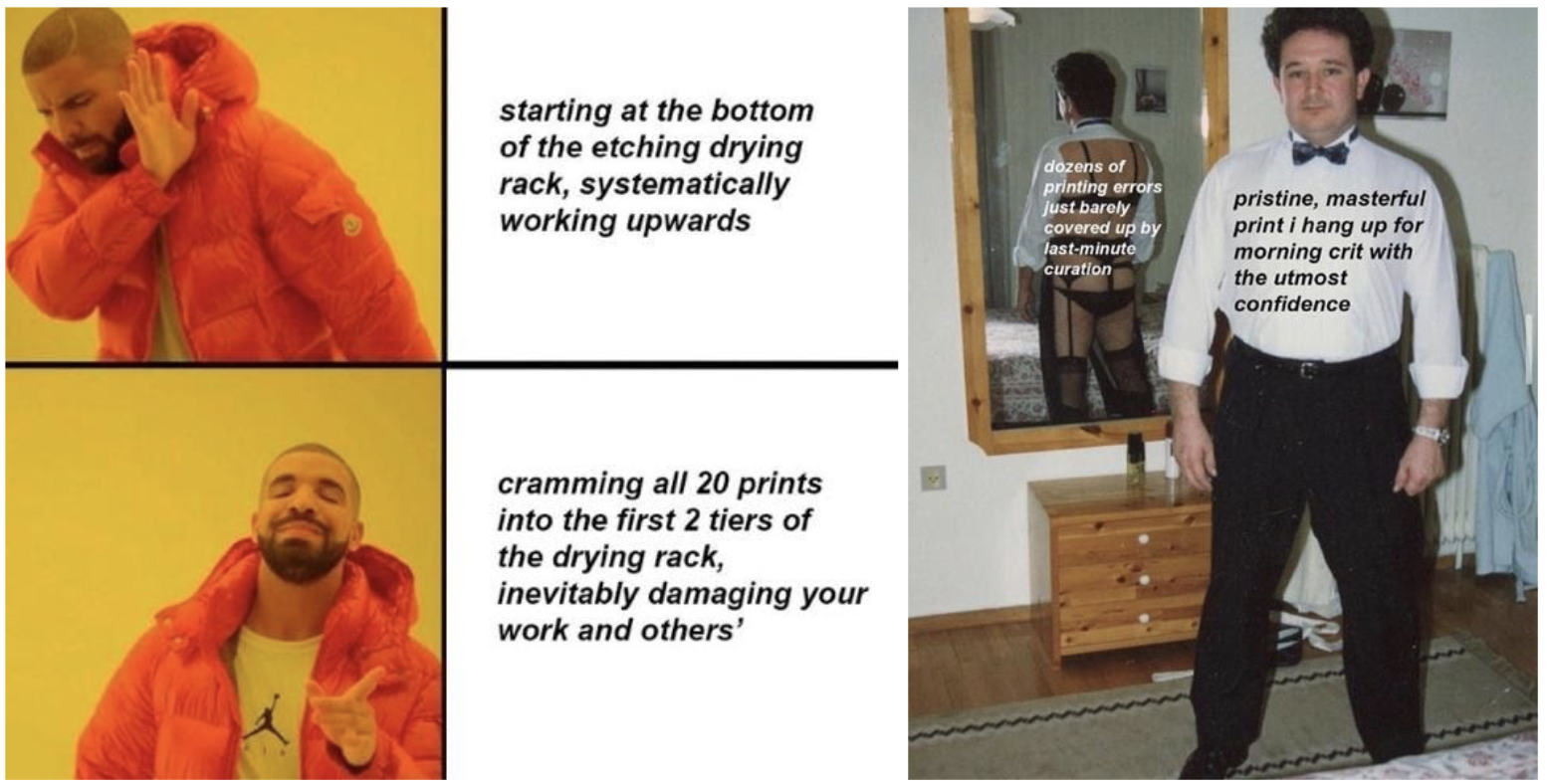 Moving on to two examples of a more modern version of a meme, these two images will be used to discuss memes relation to folklore. One of the memes being examined is a popular image featuring two screen captures from a music video taken from the song “Hotline Bling” by Drake. This meme is used to convey a satisfaction or dissatisfaction for an action or idea depending on the text and which photo it is located next to. Next, is another common meme which, shows a photo of a man that is standing in front of a mirror and looking at the camera dressed in a tuxedo. However, the mirror behind him reveals the man is wearing lingerie and a pair of ass-less chaps. This contrast of formal wear and lingerie clothing is the basis of the meme. In this meme, text will appear on the chest of the man dressed formally and then again on the mirror revealing his backside. This contrast in dressing is used to convey two versions one truth, the backside, and one a charade, the frontside.

Memes are used extensively in popular culture. They exist in countless forms and are shared in a variety of ways. These memes were taken from an Instagram meme account called Greasylithomemes, dedicated to curating and creating memes for a specific audience with extensive knowledge about printmaking. I encountered this account from a friend in my advanced printmaking class. Soon after, the account was shared to a majority of the printmaking students enrolled in the same course. Much joy was taken in the fact that the memes were created by two printmakers in undergrad for our specific community. The memes created a place to house relatable content based on a person’s knowledge of the medium and illuminated the need for printmaking related humor.

The memes discussed constitute as folklore because they are the byproduct of a group sharing one common factor which, is printmaking. Dundes’ writes, “the group formed for whatever reason will have some traditions which it calls its own…which will help the group have a sense of group identity” (Dundes, 7). The byproduct in this instance is a group of joke content that is created specifically for people with familiarity and knowledge about printmaking. The jokes in these two memes would probably not even illicit a smirk from the average person with no knowledge about the medium. However, a person with printmaking knowledge would understand the references and find humor in the memes created because they would be familiar with certain dynamics in a print lab and the processes involved in the printing. For instance, in the drake meme the image text references the drying rack. In the print lab, the drying rack can become a chaotic feature if the other printers in the lab do not use it correctly or in a courteous approach. The result is prints can become lost or damaged which is what the image references. In conclusion, folk groups can vary in size and members and the memes in this essay display a specific folk group participating in and sharing folklore in the form of printmaking memes.