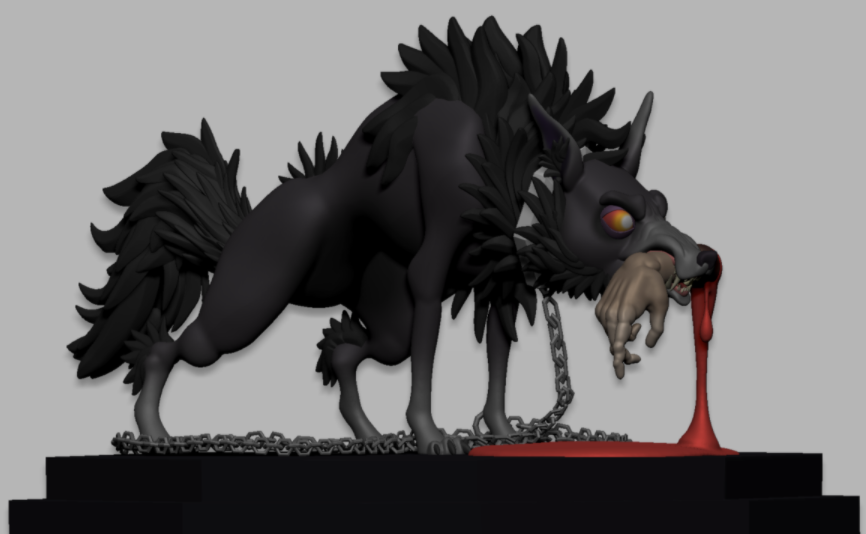 ​For my creative piece I chose to portray the Norse Myth dealing with the binding of Fenrir. In this myth, the wolf
Fenrir was growing incredibly large and strong, so much so the Gods began to fear it. They lured the wolf using
weaker bonds, betting that the wolf couldn't break them. Each time Fenrir broke free, until the Gods brought out a
special bond made of the sound of cats footsteps, the spittle of birds, and other things that don't actually exist.
Suspicious, Fenrir refused to be bound, unless one of the Gods would offer up their hand to him as a mutual act of
trust. If Fenrir couldn't break the bonds, he would take their hand. Of course all of the Gods grew anxious, none of
them would dare offer up their hand, as they knew this would be a binding Fenrir would not be able to break. Tyr,
understanding the dire situation, offered up his hand. Fenrir couldn't break the bond, and took Tyr’s right hand clean
off. I chose this myth, as Norse mythology is incredibly interesting, I enjoyed the portrayal of animals within these
myths, and felt it would be neat to portray such a graphic myth.

For research, I read through the Poetic Edda, presented by Oxford World Classics, translated by Carolyne Larrington
as well as a few websites to further understand the concept such as norse-mythology.org which provided the myths
outside of the semi poetic nature of the Edda. For this project, I really wanted to try modeling something based off
of the advice I had received from an artist who had worked on Zootopia. He had presented early concepts for the
characters portrayed in that film using just the tools found within zbrush, rather than taking it through the whole
pipeline of retopology, rigging, etc. This method of working was liberating, as it loosened my perspective of what
modeling should be, and I was able to just enjoy the process. As for the medium I chose.. I elected to use zbrush as
its a program I am the most familiar with, having worked inside it for 10 years. I wanted to experiment with
different methods of modeling, and maybe even walk away with a portfolio piece.

​The major idea I wanted to portray with this particular piece was the violence that is typically found within norse
myths, if it isn't limbs getting torn away, eyeballs removed, it’s skulls getting crushed. Norse mythology has some
darker sides to it and I wanted to explore that in a more stylized cartoony way. This was a beautiful juxtaposition, as
with stylization, things tend to be less violent. I wanted to portray the moment Fenrir lost his trust in the gods, with
Tyr’s limp pale hand in his jaws, and I feel I did just that!