by Peter White
​(written analysis below) 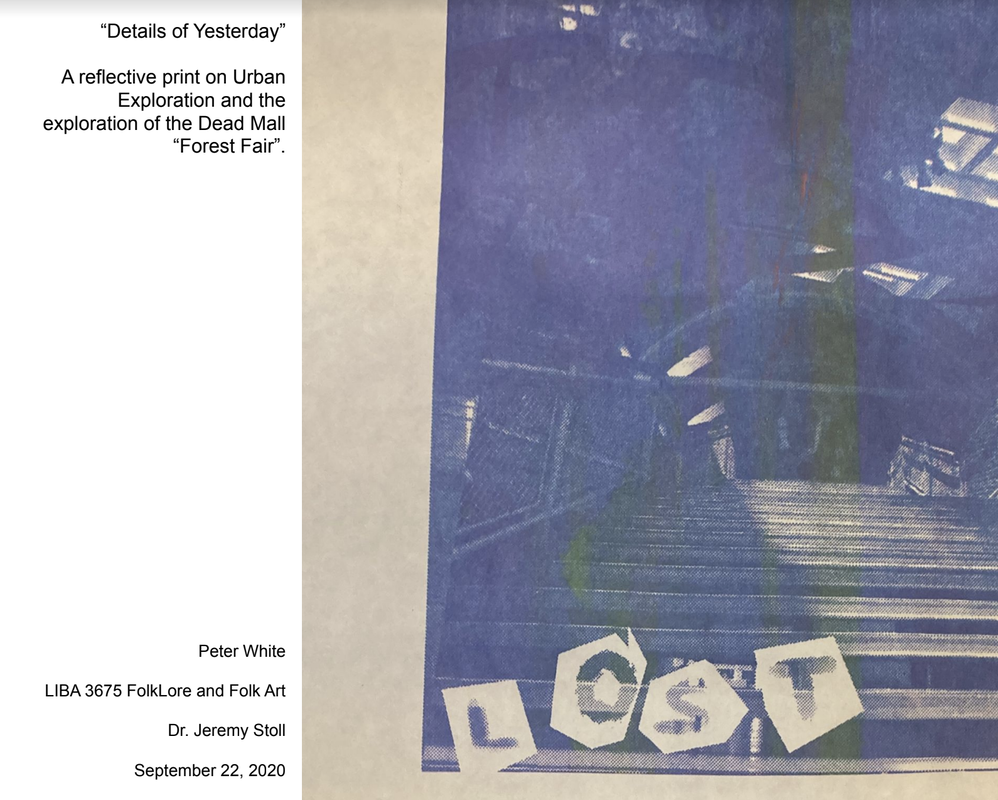 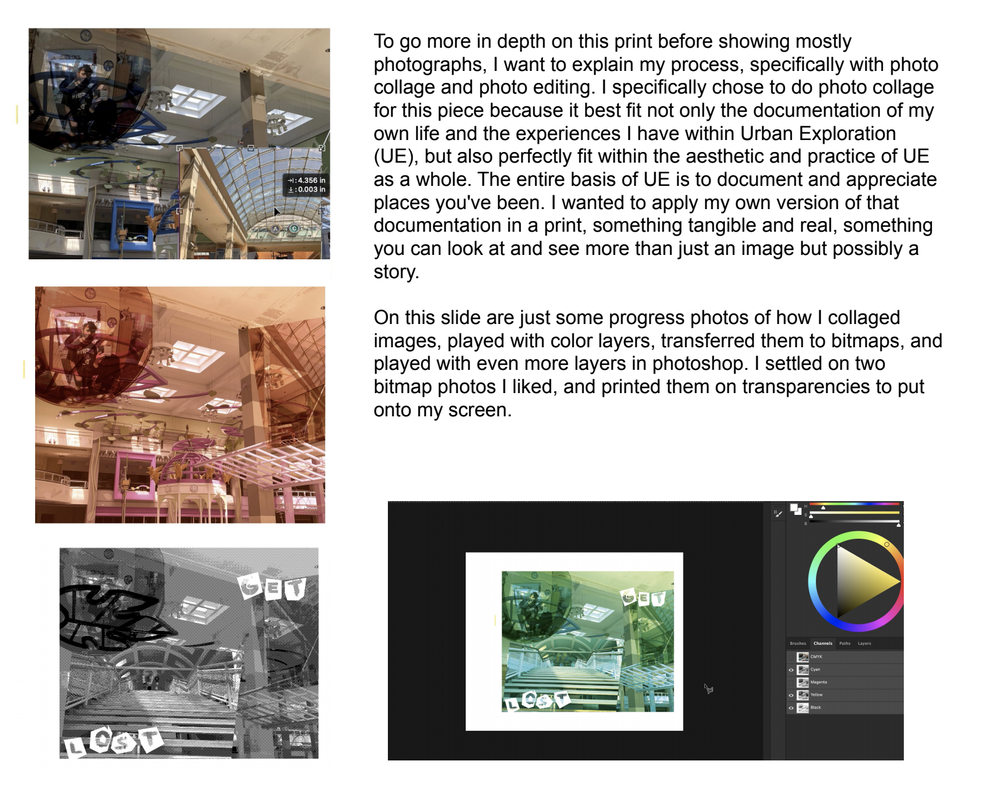 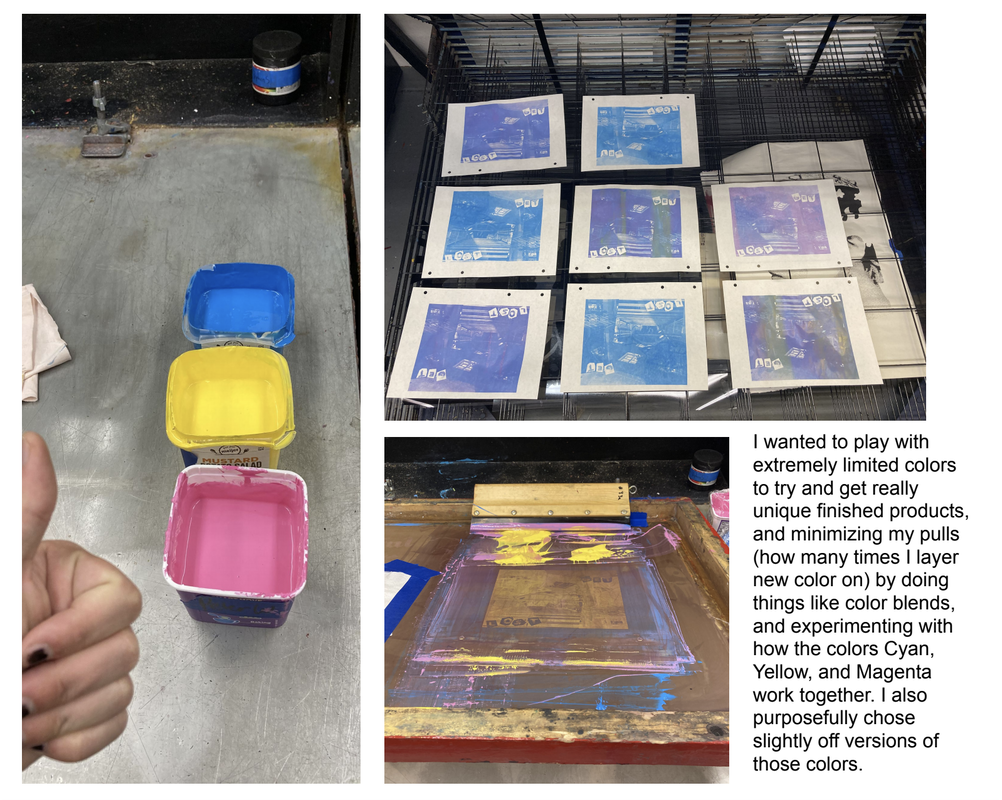 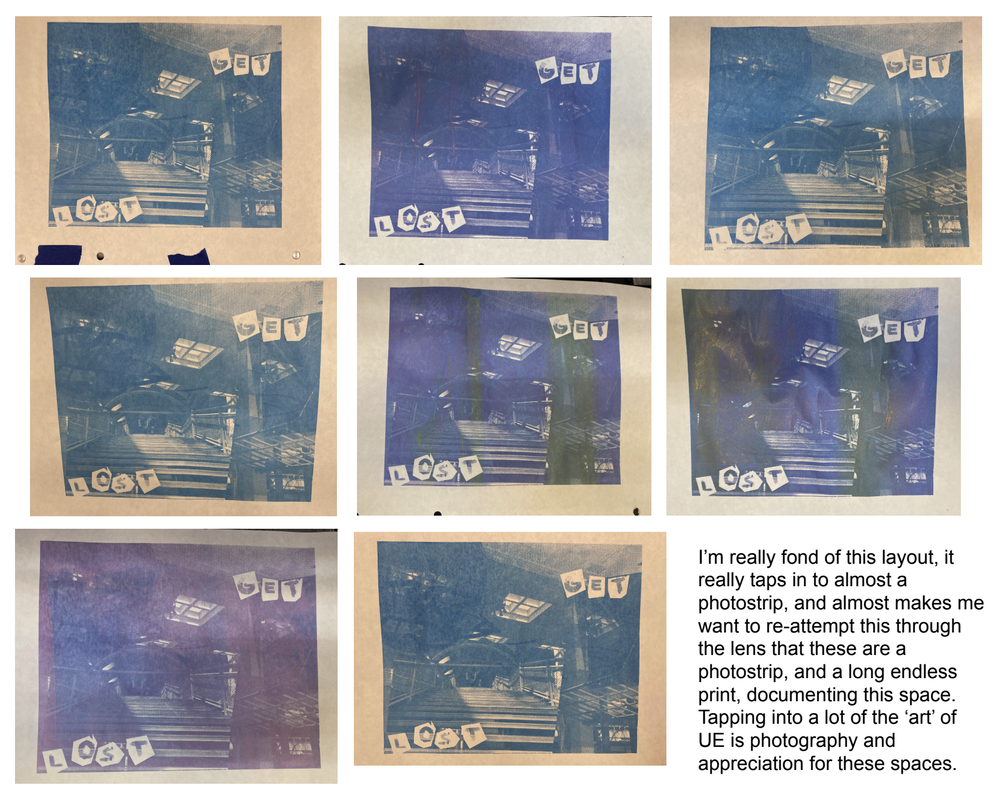 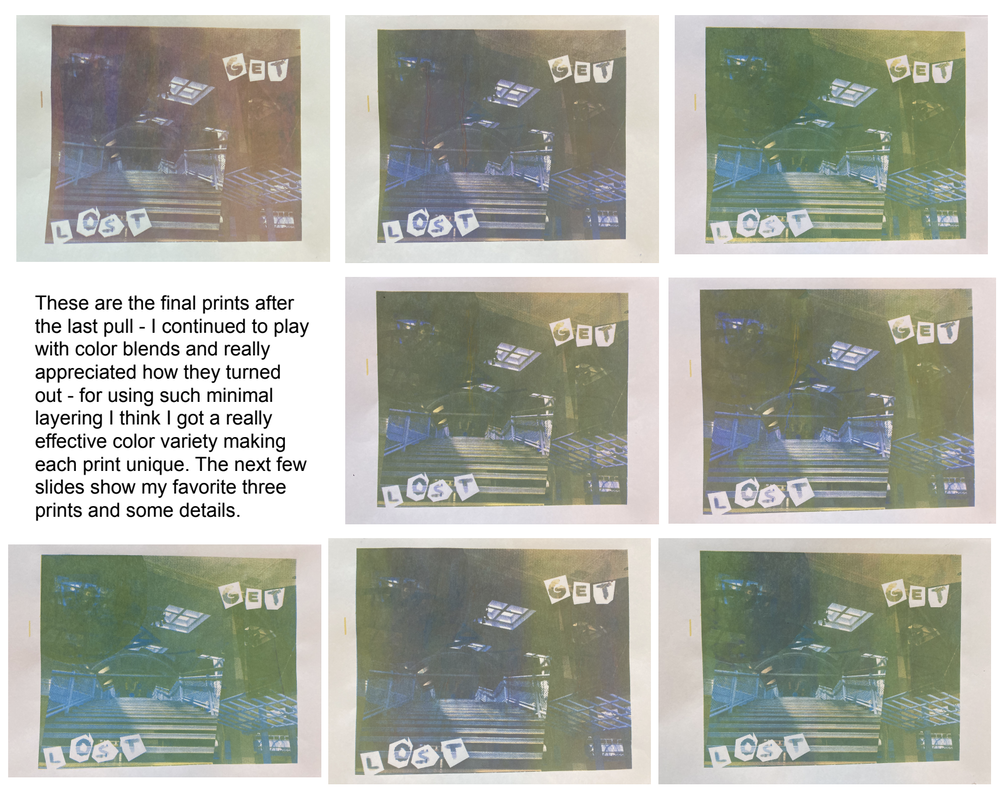 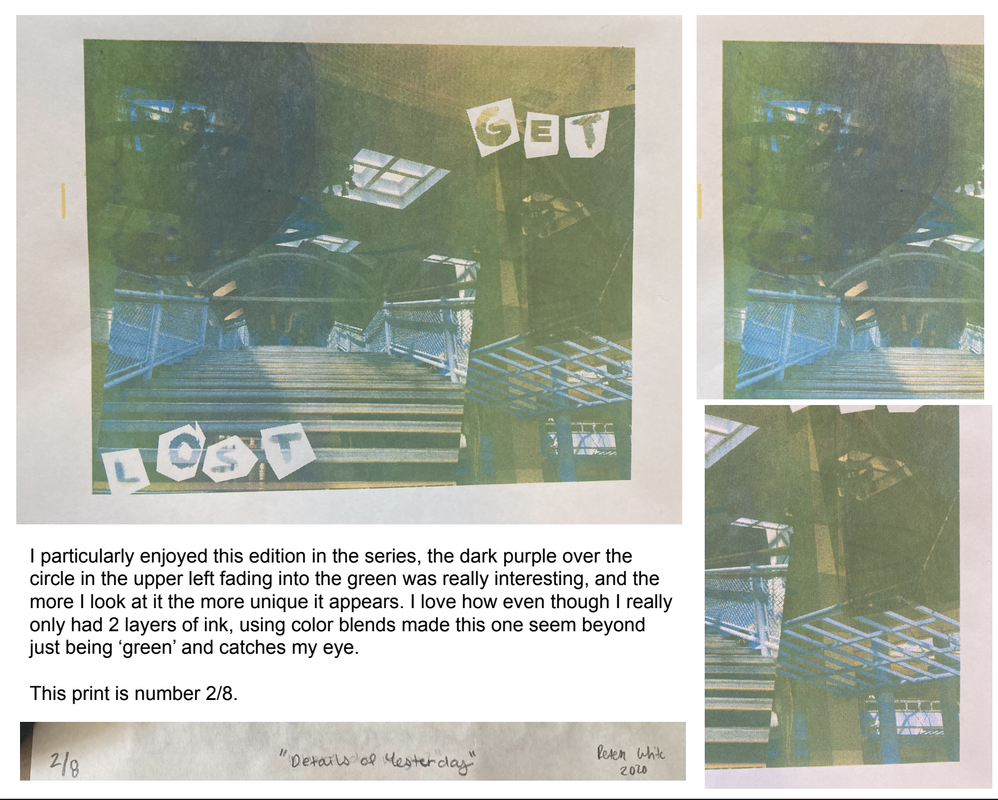 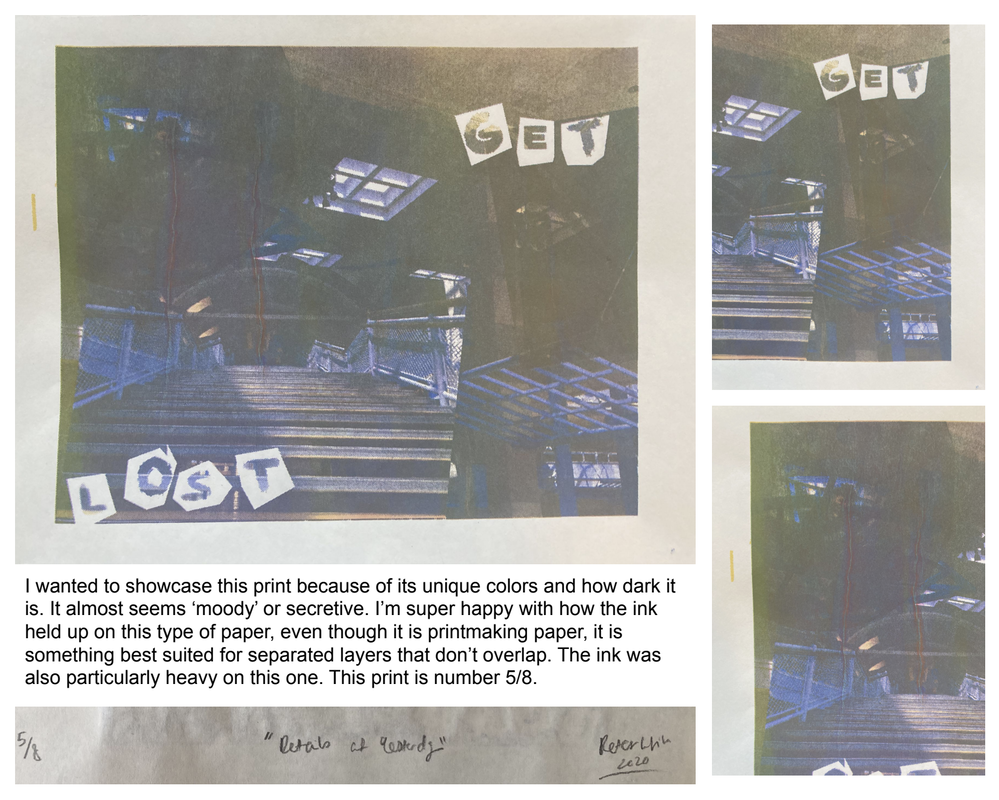 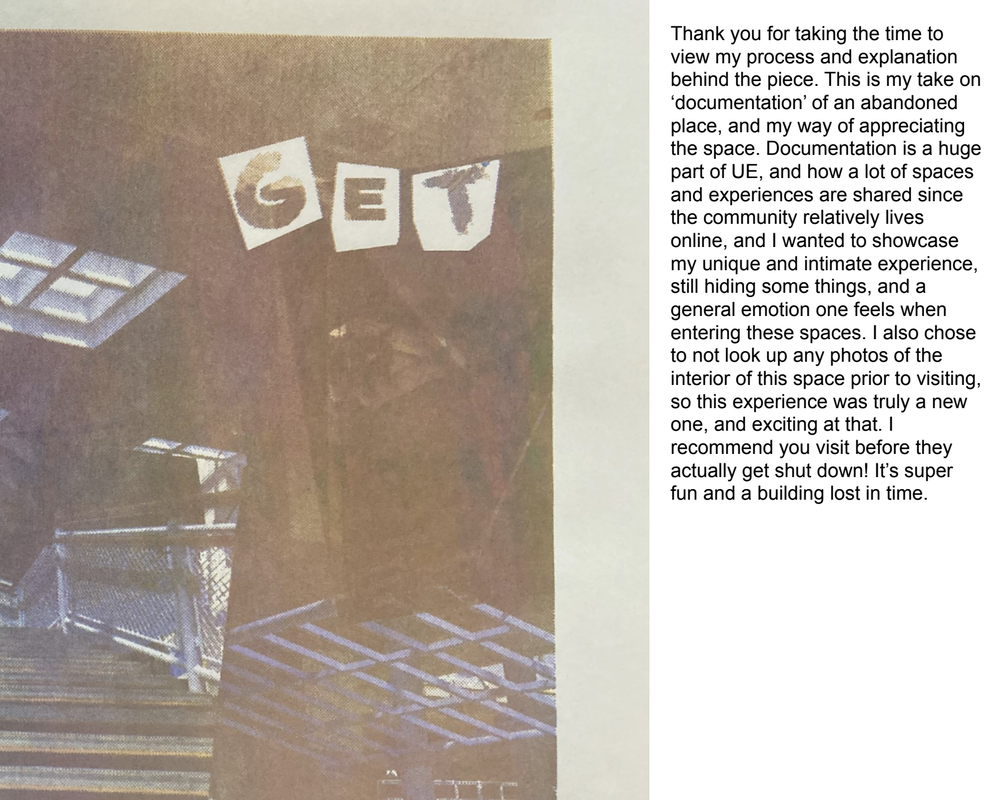 ‘Dead Malls’ is exactly what you’d think of when you hear the phrase. They’re malls that have completely lost their life, are on their way to being closed, or already shut down. Over the past few years they've become the target of Urban Exploration and the culture around it. A lot of these spaces are shut down for numerous reasons, lack of upkeep, no stores to fill it, or a high flow change from customers to explorers and loitering. The culture of Dead Mall Exploration, or Urban Exploration stems from this physical phenomena, and is a huge presence world wide. Communities tend to be local, or online, or both. Many dedicated accounts on reddit, youtube, twitter, and instagram exist to share the exploration of abandoned buildings and their unique histories. The practice focuses more on exploration, and discussing why such spaces remain empty and unused.

It's difficult to pinpoint the origin of the tradition of Urban Exploration, as it can be seen in multiple contexts without being titled as such. So, to narrow the scope of modern urban exploration, and in turn, dead mall exploration, I want to focus more on contemporary explorers, and the modernization of urban exploration, or UE. Groups like Suicide Club from San Francisco, and Jinx Crew from New York City are prominent UE groups from the 1970’s to the 1990’s that grew onto the internet and popularized the practice. Shortly after joining the internet world, UE took off, with the first book on UE written by ‘Ninjalicious’ and the UER Forum
(Urban Exploration Resource Forum) being published by 2005. In fact, the UER is still utilized to this day, but the website has aged quite a bit and experienced a decline in traffic. From there, a modern take on UE has arisen, forums like ‘R/DeadMalls’ from ‘Reddit.com’ exist solely to showcase, discuss, and explain UE and pass on the practices of exploration.

In my own experiences I've picked up the UE subcategory of Dead Mall Exploration. Specifically seeking out abandoned malls and outlet spaces that no longer have stores, or if they do - they’re barely open. A unique and recent place I went to was the Forest Fair Mall, located just outside of central Cincinnati, Ohio. We learned about it from social media and decided to go and check out the space. It was extremely empty upon arrival, the only stores being a Bass Pro shop, a Kohl's, and a Gym. Security was nowhere to be found, and there were no signs instructing us to stay or leave. It was extremely surreal, completely open access, and very dated. It seems there has been no upkeep whatsoever on the space in at least 10 years, with a lot of the bathrooms having broken mirrors, stalls, and broken porcelain on the floor.

Other than that - the space was fully functional, just no people, or stores. We managed to take some photos, but security did stop us. That is a common interaction within Dead Mall Exploration, either you interact with nobody, or security comes up at least once to ask for ID and to ensure you aren’t advertising the empty space. Even though it says online that the Mall has only two functional stores, and has been reported as both being open and not open. The reason for its decline was a long line of tax delinquency and bankruptcy from owners and tenants alike. It was an unfortunate mixture that led to the demise of the space. In fact, the Kohl's announced on august 28th, only two weeks after we visited, that they would be closing their location at Forest Fair and will be relocating to the much busier mall across town. I chose not to post my experience fully, as security would have made us leave, but I did document some aspects, prior to our interaction with security. I wanted to utilize the unique architecture and the one of a kind case of a huge empty space to play with photo collage and color. In most instances of art within UE, it's more about the documentation of the places you've been, and how you traversed them. There’s also the aspect of graffiti and street art that can be present within these spaces, and I did consider that. Due to the Forest Fair Mall being so intact, that was not really present. So I chose to focus on documentation, and exploring collage to piece together my experience in a print. (The process behind this is provided in the PDF accompanying this essay.)

​UE is a perfect example of a Folklore practice, but not so much Folk Art. A lot of the ‘art’ is based in the appreciation of the dilapidated spaces, the photography of it, and the rare instances of graffiti to prove you were there. The art could also be considered how an explorer traverses these spaces, often dangerous to explore, and how they safely enter and exit these buildings. Being respectful, but also building a sense of community upon isolated exploration is difficult, but seems to occur regardless. The scope of Folk Lore has changed it seems, but has a perfect definition when looking back on Who are the Folk by Dunde. Dunde gives the definition that “Folk can refer to any group of people whatsoever who share at least one common factor.” (6 Dunde). To explain further, Dunde believes that it is an important factor in a group's way of life or routine that unifies them in that fact. And all members don’t have to know each other, just recognize the same traditions or experiences. This qualifies UE as a folk tradition, and having a ‘folk’ that practices it. Beyond the obvious qualifications, UE fits Dunde’s definition of folk and folklore perfectly. Despite its lack of tangible art or craft. It has a community and a universal following, united by this one act, which solidifies its place within Folk culture and studies.